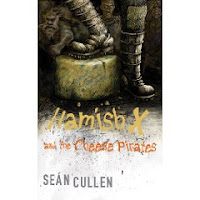 You know you’ve struck book gold when your kid can’t wait for you to read to him, but picks up the book himself and finishes it.

That’s what happened with us and Hamish X and the Cheese Pirates.
I sent a plea out to a friend (who is a great librarian and kindergarten teacher). It was this: “I need a book to read to my son!”
As you know, this is an ongoing problem for us. I read the Mary Poppins series out loud to him. Then we spent about a year reading the Harry Potter novels. And then Alice in Wonderland. And then I was stuck.

My friend suggested Hamish X and the Cheese Pirates, by Sean Cullen. Cullen is a successful Canadian comedian (Last Comic Standing, JFL) and actor (A Funny Thing Happened on the Way to the Forum) and a singer (Corky and the Juice Pigs) – but who knew he was an author as well? (Don’t you just hate him?)

Well, we started reading the book at bedtime. The beginning is a bit rocky – the first three chapters deal with Viggo, who rounds up orphans and sets them to work making a biohazardous cheese called Caribou Blue. Orphans in haz-mat suits. Erm. But I’m glad we read past chapter three because that’s when Hamish X appears on the scene.

And that’s when my son decided he could no longer wait until bedtime, and began to devour the book every chance he got. Within two days he’d finished all 34 chapters, 293 pages. (My son is eight. This is some good book.)

Hamish X is a great hero. An orphan himself, he is forced to work in the hazardous cheese factory, and yet you know he’s going to find a way to liberate those cheese-making children. He has mysterious boots that can’t come off, and a book about plumbers supposedly given to him by his mother. And yes (spoiler alert) he does rescue the orphans.
The book is, like Sean Cullen himself, quirky. And funny. And kind of odd. But it’s highly readable. I’m reading it myself now and thoroughly enjoying it. My son is on to book two in the three-book series, Hamish X and the Hollow Mountain.
The Hamish books include quirky footnotes that are sometimes real and sometimes complete nonsense. Again, much like Sean Cullen himself.

Here is a link to Sean Cullen’s website. Go. Enjoy!

Cullen’s working on his next series of books about a “Prince of Neither Here nor There.”

Good lord, is there anything Sean Cullen hasn’t done? He was in The Producers. He looks good in a porkpie hat. He has a radio show on CBC. And he makes up most of his stand-up material as he goes along. And you don’t know him because…? (Ah yes, he’s Canadian! Well, that’s just fine–it works for the Tragically Hip, right? Ha!)