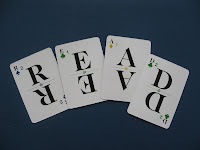 Reading doesn’t have to be on a page.

If your child is a kinesthetic learner – he learns by touching and doing rather than by seeing or hearing – here are some great ideas.

Use letters made from blocks, cards, fridge magnets or Scrabble tiles.

Toss seven large letters (blocks, or wooden cut-outs) in the pool. Have him dive for them and make a word when he surfaces. Don’t worry about how many dives it takes – let him just have fun.

In the bath, toss in a handful of foam letters. It probably won’t be long before he starts making words that float around him!

Toss a handful of Scrabble tiles into a large bowl of rice. As he digs for the letters, he has to try and make words with them.

Play word games like Scrabble, “scramble” (online), or Word Thief (board game). Simplify the rules so it’s more about making words and less about beating the other person.

If you’re giving your child letters to make a word, look at them first. Make sure there are Es and As, and simple consonants like Ms, Ss and Ts. Consider adding in a “wildcard” that can be used for any letter.