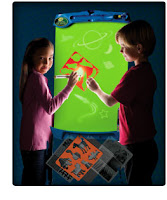 So, here’s a pretty cool product.

Crayola’s Glow Station is essentially a flexible white board made of a phosphorescent material. It comes with a pen-flashlight so kids can “write” (or draw) using light.
At first, I thought it was a one-trick pony. My son used it the first time for half an hour and then didn’t really go back to it.
However, as time goes by, I’m liking it more and more. Here’s why. It hangs on his wall, so it’s always handy.
Come bedtime, our family inevitably writes messages to each other.
So actually, it’s becoming a pretty good literacy tool. It’s getting my son to write more, and that’s hard to do. (He loves reading, but writing – not so much.)
The Glow Station also comes with stencils and an adapter that creates little starbusts of light.
But the real genius of the thing is the fact that kids will use it, again and again, to pass messages back and forth. In the dark.
By the way, check out this website that’ll explain why things glow.
I couldn’t take a picture of my son’s Glow Station because it’s, like, really hard to get a picture of stuff that glows. You use a flash and it doesn’t glow – you don’t use a flash and you can’t see it. So you get the Crayola image, and they’re drawing not writing. Your kid will write.