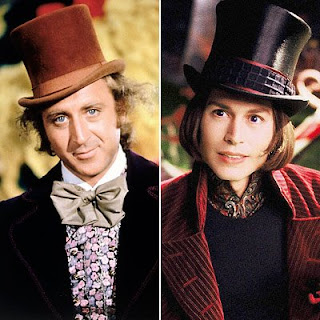 Willy Wonka has been a huge success.

As you may remember from a previous post, my son and I were looking for a book to read aloud, and I stumbled upon Charlie and the Chocolate Factory, by Raold Dahl.
We read it in the course of about five nights and it was great fun, from beginning to end.
That led to us finding the soundtrack at the library, and after my son had listened to that a few million times (and we were both stuck with the “Augustus Gloop” song in our heads), we rented the films. Both of them.
The original version stars Gene Wilder, who plays Willy Wonka basically as written – slightly dark, but mostly whimsical. And then we watched the one with Johnny Depp as Wonka, who was a bit more disturbed. And, director Tim Burton added a whole back-story about Wonka’s father, which wasn’t in the book.
After that, we watched the behind-the-scenes stuff, including a look at what the characters from the original movie are doing now (they’re mostly accountants), and a documentary about the technology behind the Johnny Depp version.
We found out that the film was originally created to launch a Willy Wonka candy bar by Quaker Oats. Unfortunately for Quaker, the candy bar tended to melt on the shelves, so it had to be recalled. The movie, however, went on to become a great success.
It gave my son and I a good chance to talk about how both films interpreted the book, and what they’d added or left out. And it really added to our enjoyment of the book.
So that’s that. All we have to do now… is find a new book to read.
“Augustus Gloop, Augustus Gloop, you great big greedy nincompoop.” Watch the video here.