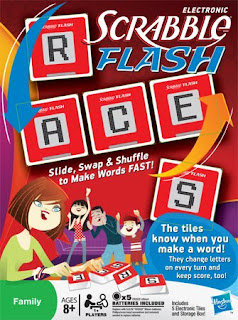 Don’t you wish there was a board game that encourages literacy – but which your kid would actually enjoy?

Scrabble Flash goes one better… it’s also electronic, which kids love. And it’s completely portable, packing down into a little holder about the size of a small TV remote. (Which parents love.)
You get five electronic Scrabble tiles. Line them up so they’re touching at the sides (they “talk” to each other electronically this way). Turn them on, and select Game 1, 2 or 3.
Game 1, Scrabble Flash
The five tiles each display a letter. You have to arrange them into words. For instance, if you get P-A-C-E-S you could make PACE, PACES, ACE, ACES, SEA, APE, APES and so on. You shuffle the tiles around to make as many words as you can in 60 seconds. After you make a word, the tiles flash to signify that your word is acceptable. If it’s not a word, it won’t flash and it won’t count. You can create three, four or five-letter words, although five secon 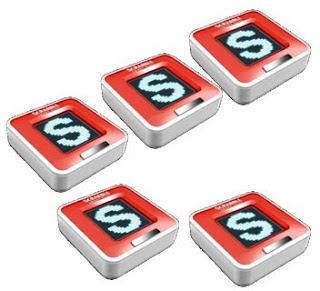 ds are added to the clock every time you create a five-letter word.
When the time runs out, you’re given your score (“SCR08”) and the highest score you could have gotten if you’d guessed all the possible words.
Game 2, Five-Letter Flash
Use the letters to create five-letter words. When you create a five-letter word, you’re given five new letters. You keep going until you can’t think of a word and the time runs out. It’s a great one-person game.
Game 3, Pass Flash (for two or more players)
Just like in Game 2, you have to create five-letter words. When you’ve got your word, the tiles will say NEXT and you pass them to the next player, who tries to get a five-letter word. If someone misses, they’re out and the tiles will tell you what the word was before encouraging you to pass them to the NEXT person. Last one standing is the winner.
Bring out Scrabble Flash the next time your family is waiting for their meal at a restaurant. It’s not noisy, so you won’t disturb anyone, and it’s truly portable.
In our family, Scrabble Flash has been an instant hit, not just with our son but with the adults as well. And it’s kind of addictive, actually. You want to keep challenging yourself, keep making words.
It’s extremely easy to use and the rules are simple. It’s not one of those games that has pages of arcane rules – it’s as simple as, or simpler than, Scrabble. You can play for five minutes or you can play for an hour. It’s probably best with one or two people, but theoretically you can play game 3 with a whole bunch of people.
And it will help improve kids’ literacy skills, because the more they play with letters and words, they more they will understand how they work together. For instance, every time you get an S, kids will pretty quickly figure out that they should try it at the end of the word. And then try the word without the S for a second point. Same thing when they get an E or an ES. And from there, other combinations like EA or OU.
This is a seriously good game, and I give it two thumbs up. It sells for about $30 and if you’re buying it somewhere other than Canada or the US, it’s called Boggle Flash.
Here are a couple of other reviews of Scrabble Flash.
1) http://scrabble.wonderhowto.com/blog/new-game-by-hasbro-electronic-scrabble-flash-0118257/
2) http://drakesflames.blogspot.com/2010/09/word-game-review-scrabble-flash.html
I should mention that Hasbro gave me a “review” game of Scrabble Flash for free after I’d requested it. I mention it in case you think that my getting the game for free might skew my review. I don’t think it does, because they also sent me another game that was OK but which I didn’t think had tons of literacy potential, so I simply didn’t review it. Dat’s mah policy.
Also, the photos on this page were supplied by Hasbro. I thought they’d be better than the lousy ones I’d probably take with my point-and-shoot. But now that I see them on the page they aren’t that great, actually. Makes me feel better anyway.