Here’s a great game that can spark an interest in plot and character. (And giggling and goofiness.)

By Jennifer A. Nielsen

A great road trip game is called “No, It Wasn’t.” It’s played with partners. One begins telling a story—any story. The other interrupts as often you like with, “No, it wasn’t”—or any grammatically-correct contradiction.

And so on. The challenge to the storyteller is to instantly change direction, as often as they’re prompted.

As the story continues, the predictable story lines usually fall away, and the requirement to make changes opens the doors to great creativity. A new story begins to emerge, one that goes in radical new directions. In the example with Jane above, it would’ve originally been a story about her going to visit her friends. In only three twists, Jane is on the run from the police.

Here it is: When (Main Character) came home that day an old friend was waiting.
No, it wasn’t.

Ed: Thanks, Jennifer – it is a great game. My son and I played it and we giggled like idiots the entire time. I found that the game worked best when the adult did the first story-telling, so the child could get the hang of it. All he had to say was, “No it wasn’t” and he could sort of see how things changed because of that. Then when it was his turn, he understood what needed to happen in his retelling. Thanks for letting us reprint this from the blog, Writing For Kids. 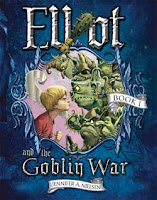 Jennifer A. Nielsen’s debut novel Elliot and the Goblin War was released in October 2010. And it comes with a warning–as of today, only seven children who have ever read this book have lived to tell about it. If you’re very brave, perhaps you’re willing to take your chance with it. The next book in the series, Elliot and the Pixie Plot will be released in May 2011.
(Ed: As soon as she’s able to send us a review copy, we’ll post a review about it. But I love the cover – look out, goblin! JG.)